Die-hard Electro Arc fans remember the Model F-5 Carbide impregnator, like the Cherry Rivet Division which found the F-5 extended the life between sharpenings on their drills by a factor of ten as mentioned in The Machinery article “Carbide impregnation – stepchild process with tremendous potential” published July 1971.  Spaulding Fibre company was also quoted stating they were able to produce 2-4 times the parts between sharpenings when they used the Electro arc Model F-5 to impregnate their dies and punches. 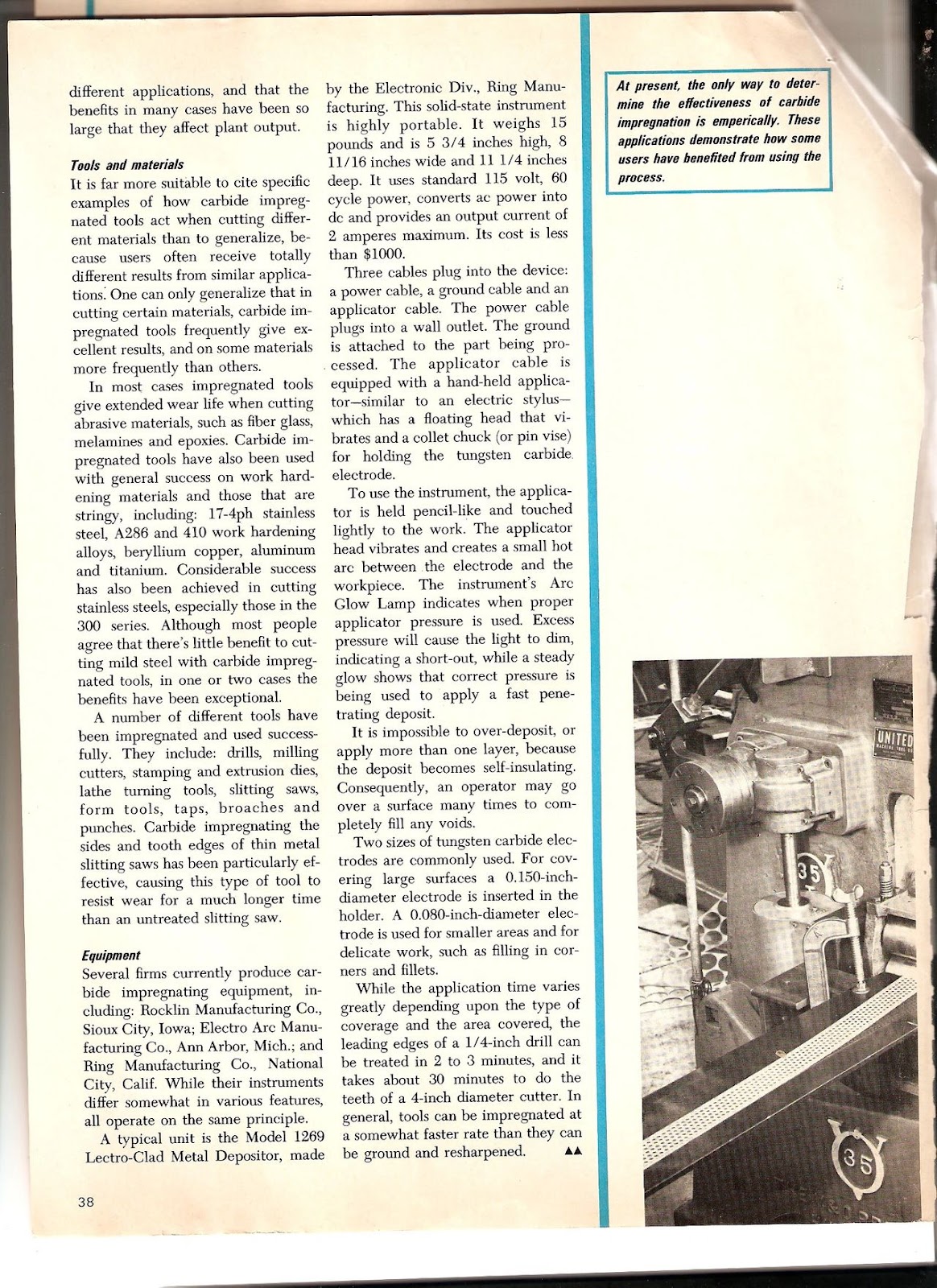 In a separate article also published by Machinery, “Broaching encroaching on milling” Mercury Broach states they use the Electro Arc Carbide impregnator daily.  They were able to improve the life of their high-speed broach 2-4 times between sharpening and process materials normally considered marginal for high-speed steel broaches.

In response to these publications, Electro Arc released two Engineering bulletins.  An Indiana company Speedgrip Chuck had determined that carbide impregnation improved the life of their collets and chucks substantially.  In response to the success they had achieved, they received increasing requests from their customers for carbide impregnation.  In turn, these customers became customers of Electro Arc, purchasing their own machines.

Similarly, a company based in Utica NY Kelsey-Hayes a company manufacturing buckets or fins that fit jet engine turbines, which due to the inspection requirements for precise forging had to be remade on an average of 3 weeks.  When impregnating their blades they found the life was increased to an average of four months!

The same principles that inspired the innovation offered by the Electro Arc carbide impregnator, lent themselves to each of Electro Arc’s metal disintegrating machines.  These long-lasting machines continue to improve the life of parts, reduce cost and increase efficiency for our customers.  When you have a large, heavy part the cost of replacing the entire piece like a wind turbine or jet engine is inconceivable!  Electro Arc’s Metal disintegrators are made in different powers, sizes and are fully customizable to match the needs of your operations!

Prices are going up on February 1st! Take advantage of our current prices before prices increase! Dismiss